Visit Slovenia’s attractions, the uniqueness of which places them on the wish list of must-see destinations of many travellers from all over the world.

MY WAY OF EXPLORING.

Mighty castles on steep cliffs where unforgettable views await you. Charming old city centres with a vibrant modern vibe. One of the most romantic islands in the world where your secret wishes come true, and one of the most picture-perfect towns shaped by the vicinity of the sea. A mysterious underground world with unusual inhabitants. A white horse that has been the symbol of beauty and elegance for centuries. Slovenia’s iconic attractions are a great place for experiences and unforgettable pictures that you can share with your friends on social media. They take you through the tumultuous history of Slovenia, marked by its strategic location and various conquerors. At the same time, they allow you to learn about the unique unspoilt green landscape, a modern and vibrant vibe, and excellent culinary offerings. 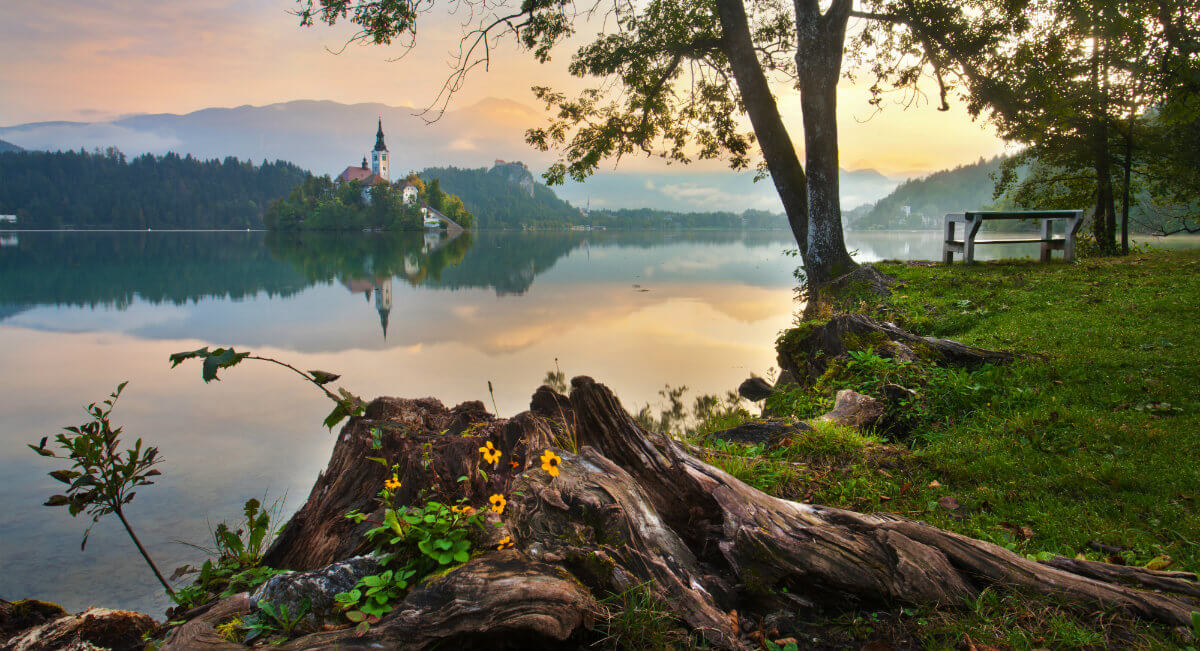 One of the most recognisable images of Slovenia that has circled the world countless times is the image of Lake Bled: a small island in the middle of a lake, with a church on it. The backdrop of this perfect image is complemented by an age-old castle dominating the landscape from a cliff top. World media and influencers have named the image of Lake Bled with its island and castle as one of the most romantic in the world and recommended it as an ideal venue for an unforgettable wedding.

The traces of history go far back in this place: prehistoric remains from the period from the 11th to the 8th century B.C. have been found on the island, and evidence from the period from the 9th to the 11th century indicate that this had long been a place for worshipping various gods. Take a walk around the island and draw on the special energy of this place, and then visit the 17th century church and ring its wishing bell. At Bled Castle, the story of which begins in 1004 A.D., you can explore the history of this magical place in even greater detail, you can see one of the open-air cultural events, enjoy the wonderful view of the island and the surrounding area, and go to a restaurant to treat yourself to one of the Slovenian traditional dishes with a modern twist. 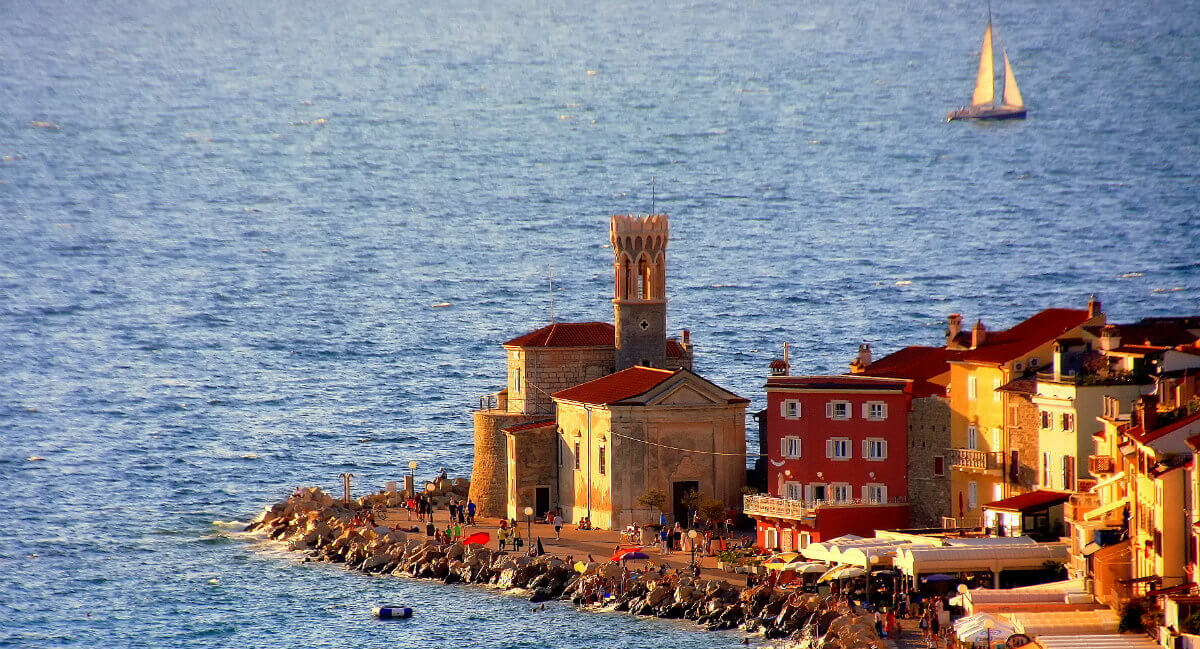 Images of the coastal town of Piran, also known by some as Little Venice, have also made their way around the world. The similarity with the Italian city is two-fold: its coastal location and the appearance of the buildings that were constructed when it was a part of the Venetian Republic. Piran is a town of history and it is, in its entirety, a cultural and historical monument.

Stories from the past accompany you at every step you make through its narrow alleys that take you from the coast to the little hills with the remains of the medieval wall and to the Cathedral of St. George. Its beginnings go back to the 12th century, and its current appearance is from 1637. If the weather is nice, you can enjoy an unforgettable view of the Gulf of Trieste and you can even see all the way to Venice. Other churches, mighty palaces, and squares where you can observe the hustle and bustle of everyday life are also tucked away in Piran. A few times a year, you can also hear the sound of the violin of the virtuoso and composer Giuseppe Tartini, who was born here in 1692.

Ptuj, located in a completely different part of Slovenia, is also most certainly picture-perfect. The location by water, the River Drava, and its past have also strongly affected its appearance. It is considered to be the oldest town in Slovenia, where remains from Stone, Bronze, and Iron Ages, Antiquity – the rule of the ancient Romans, and the Middle Ages can be found. A walk through its centre is a true journey through time, which you can complement by visiting a Dominican Monastery and the castle that has dominated the town’s skyline for centuries.

Ptuj is also a town of festivals inviting visitors to join festive events in various months. The Pustovanje celebration is certainly the most well-known. During this festival, various characters flood the town streets, and the Carnival Prince takes over the control from the mayor on their behalf. This festival keeping the age-old tradition of chasing away darkness and winter is called Kurentovanje after the main character, Kurent, and it was also placed on UNESCO’s List of the Intangible Cultural Heritage of Humanity.

Ptuj also boasts an age-old wine-growing tradition, so complete your cultural journey through this unique town by visiting the oldest wine cellar in Slovenia.

The ghosts of the past also swarm around Celje. Just like Ptuj, the town’s appearance was marked by Antiquity and the Middle Ages. Discover the remains left by ancient Romans underground, in Celeia, an impressive town underneath today’s town. You can explore the tumultuous medieval times above the town, at the might Celje Old Castle. It was built on a steep rocky cliff top and, since the 12th century, it has observed the development of the town, the fate of which was influenced by the family of the Counts of Celje. In addition to buildings, the most important noble family from the area of today’s Slovenia left behind many stories in Celje and its surroundings, which continue to inspire artists today. One of the most special ones is the tragic story of the forbidden love between Count Friderik II of Celje and Veronika Deseniška, a noble woman of a lower rank – they are considered to be Slovenia's Romeo and Juliet.

While following the footsteps of the Counts of Celje, also visit various museums and galleries and listen to some music at the Celje House of Culture. 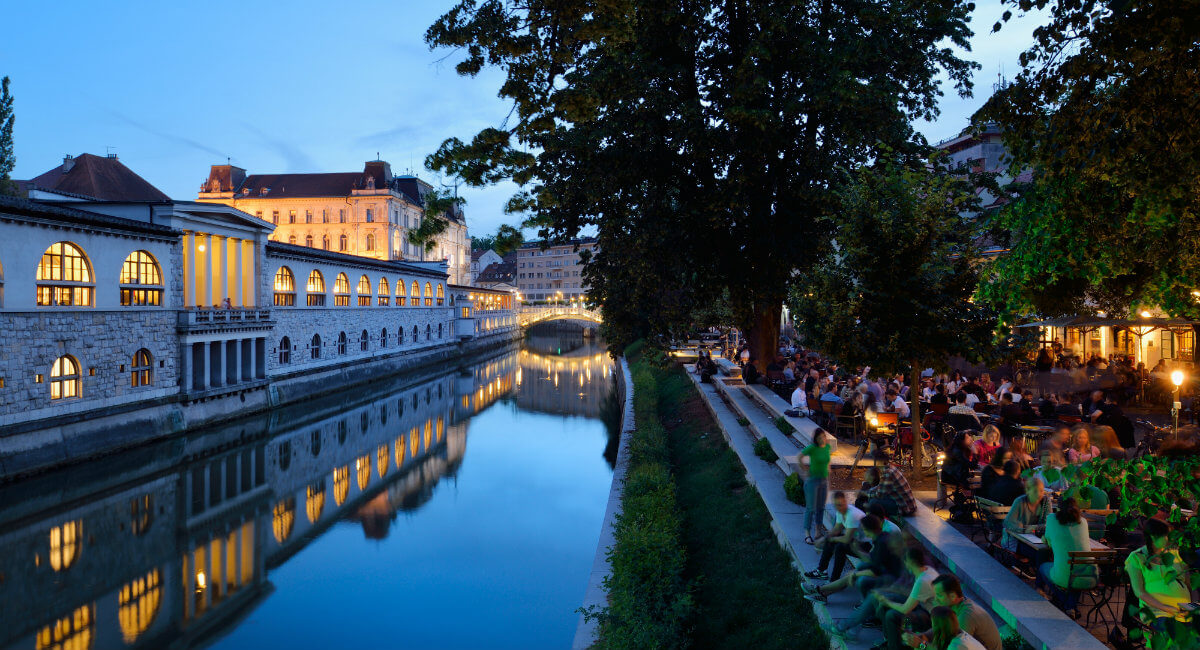 Ljubljana with its old city centre and the castle, Plečnik’s Ljubljana

Ljubljana Castle, the capital's imposing landmark, could also tell a story or two. For centuries, it has been observing the hustle and bustle of the city below and even beyond its limits. Climb up to its tower and treat yourself to the same view. Explore its interior that continues to surprise visitors with new discoveries and possibilities for understanding the past. The path from the castle leads you to the old town centre, nestled between the Castle Hill and the River Ljubljanica. A walk through paved streets, past buildings that have stood there since the Middle Ages, takes you across the Three Bridges (Tromostovje), which was, in addition to many other landmarks, designed by the architect Jože Plečnik. It was mainly in the period between the two world wars that he created masterpieces that have significantly transformed Ljubljana’s image, giving the city its appearance as a true capital.

Today, this is a vibrant city that charms everyone with its incredibly well-preserved city centre, culinary offerings, and dynamic cultural events. Explore it on any day of the year, as various cultural institutions, museums, and galleries offer a rich and diverse programme. Various festivals that bring the streets and squares of the city centre to life are also held in Ljubljana. 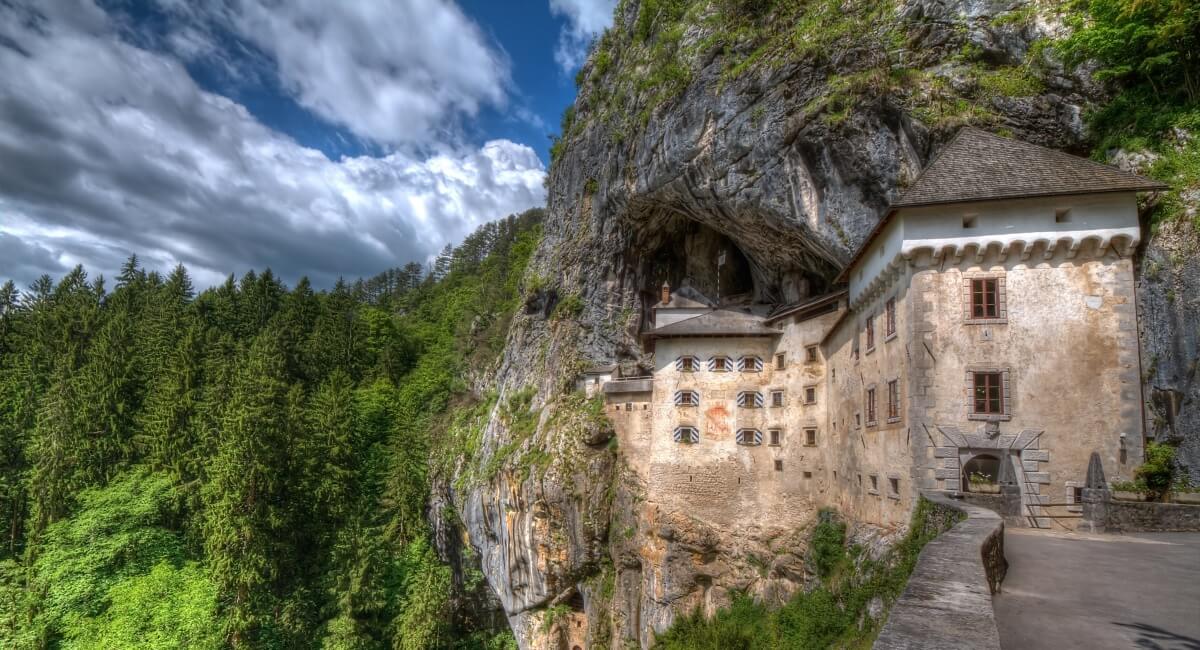 Predjama Castle and Postojna Cave are also two of Slovenia’s iconic attractions that are admired around the world. Another world exists in Slovenia – the underground karst world, the mysteries of which will probably never be fully uncovered. Postojna Cave marked 200 years of organised visits to its interior, which surprises visitors with the shape of stalactites and stalagmites and its diverse flora and fauna. The human fish is the ruler of the underground – it was once thought to be a dragon baby. This special animal serves as the indicator of a healthy ecosystem.

Visitors are also charmed by the nearby Predjama Castle, a castle built into a rock wall. For about 800 years, the castle, which is built into a rock wall at the height of 123 metres, has instilled admiration and fear due to its magnificence and mystery. Many stories surround the castle, namely about secret passages, knights, and ghosts, which still excite our imagination. Visit one of the most unusual castles in Slovenia and discover the story of a legendary rebel knight, Erazem of Predjama. 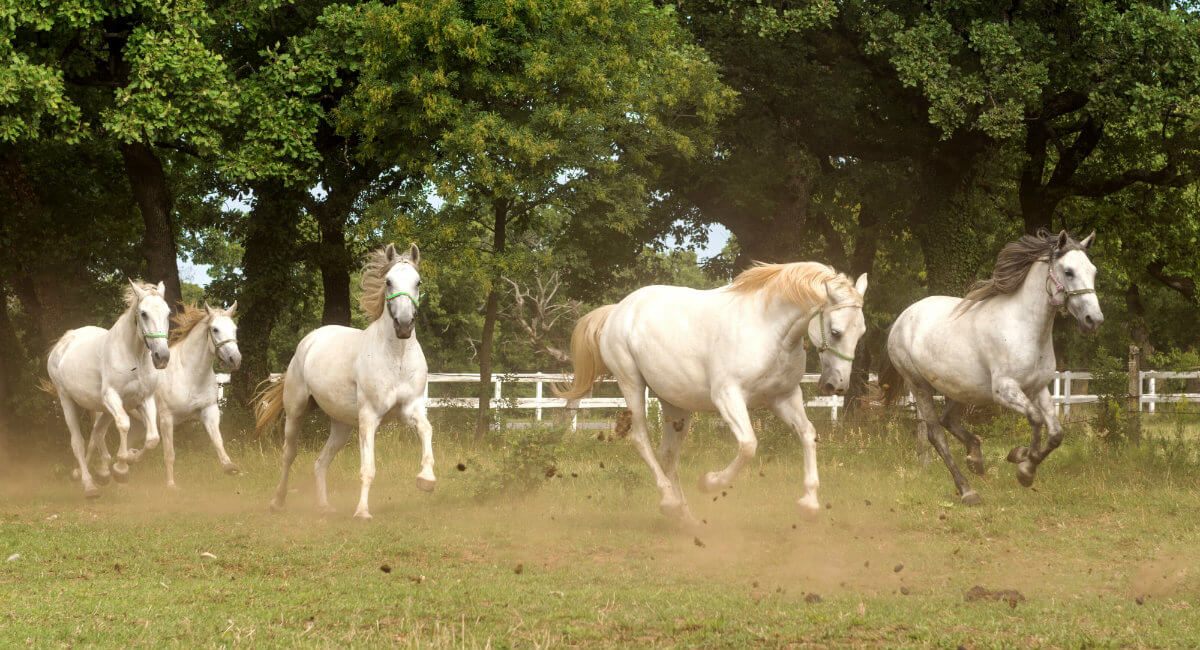 In the mysterious karst world, you can also visit the home of the white Lipizzaner horses. These horses have been continually bred in Lipica, its original stud farm, since the 16th century. This is the oldest stud farm in Europe that has continuously bred one of the oldest horse breeds.

The landscape itself is breath-taking, a green oasis in the midst of white limestone world, in which you can learn about the Lipizzaner horses as they graze. You can also explore the landscape in their company – by going on a horseback riding tour or a carriage ride. The elegance of this white horse can be admired at special shows that tell the story of love, pride, and beauty. You can also learn about this exceptional, more than 400-year-old heritage at the Lipikum interactive museum and at various events in Lipica.

Discover other jewels of Slovenia as well

Slovenia is a diverse country, as are its greatest natural and cultural treasures. In addition to its iconic attractions, also discover other beautiful sights sand interesting features of this green country.

In Slovenia, see stunning artefacts that are considered to be the oldest in the world.

Soča, the emerald river of a thousand special features

The largest shepherds’ settlement in Europe.

Listen to the waterfalls humming away in the green valley.

For more than 450 years, the world’s oldest vine has remained firmly rooted in the heart of Maribor.

The stories of exceptional Slovenians who made world history.

Share your photos and videos about Slovenia using #ifeelslovenia. 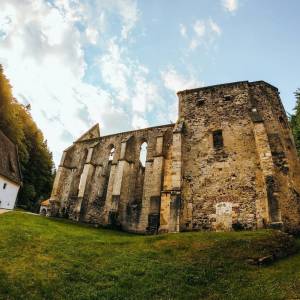 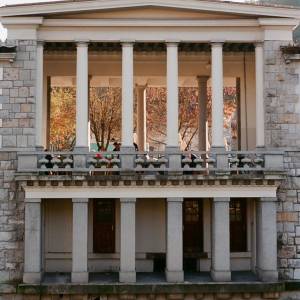 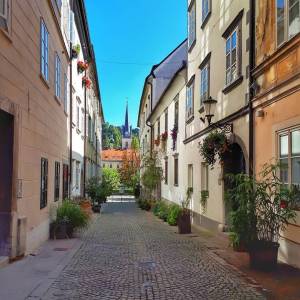 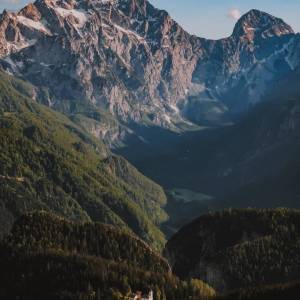