In the central Plenary session, after the introductory examination of projects aimed at realising the objectives of the current strategy and an analysis of the performance indicators of the Slovenian hotel sector, we will focus on priorities, strategies and measures to make a breakthrough and achieve a higher price position and to increase added value in Slovenian tourism. 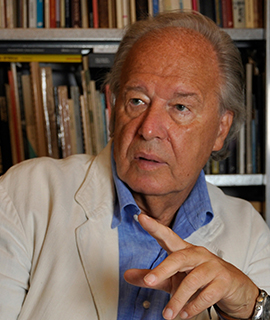 Boris Podrecca spent his childhood in Trieste, studied sculpture in Venice and architecture in Vienna, where he lives and works.

Guest professorships in Lausanne, Paris, Venice, Philadelphia, London, Vienna, Harvard-Cambridge (Boston) and since 1988 full professorship at the Technical University of Stuttgart as Director of the Institute of Architectural Design and Theory of Space.

He received several honors and prizes as Doctor honoris causa of the University of Maribor and is Member of Honor of the Academys of Sciences and Arts in Slovenia.

Other important works are in Vienna the 220 m high Millennium Tower, the Vienna International Biocenter and recently the DomMuseum; in Venice the residential housing Judeca Nova and the conversion of the Museum of Modern Art Ca’ Pesaro, in Maribor the University and the Medicine Faculty; and in Limoges, France the Museum of Porcelain Adrien Dubouché . Under construction are the “Austria Campus Business Center” in Vienna and the “Metro Area San Pasquale” in Napels.

For the last 15 years, Guy has been delivering award-winning consulting services focused on helping cities, governments, associations and the hospitality industry step up, scale up and speed up their sustainability programmes and operational practices.

He is a recognised expert on creating sustainable destinations, communities and events through multi stakeholder collaboration. Guy is also the Managing Director of the Global Destinations Sustainability Index; a multi-stakeholder partnership to accelerate the development and performance of sustainable business tourism destinations. Today over 60 cities are participating in the www.gds-index.com.

Guy is a passionate and outstanding communicator, who has delivered over 400 keynote presentations and facilitated workshops engaging over 35,000 participants in more than 40 countries. Guy’s pioneering work has been recognised with 21 sustainability awards.

Climate change has become a reality as phenomena such as droughts, rising sea levels and heat waves affect guests' behavior and their choice of destinations on a daily basis. Only destinations that will actively adapt to them will retain their authenticity and attractiveness, so sustainable management and care for the natural environment are the only way forward. Slovenia has embarked on this path many years ago, and green DNA can also be redeemed for raising the value and improving the reputation of both the Slovenian brand and the destination brands within it.

At the 22nd Slovenian Tourism Forum this time, redesign of tourism will be at the forefront of the eyes of consumers and service providers in tourism.

At this year's Days of Slovenian Tourism, key speakers of the plenary session will focus our thoughts on the future: what kind of shifts are necessary if we want quality tourism that will meet the challenges of the future.

Register for Plenary and/or the 22nd Slovenian Tourist Forum.