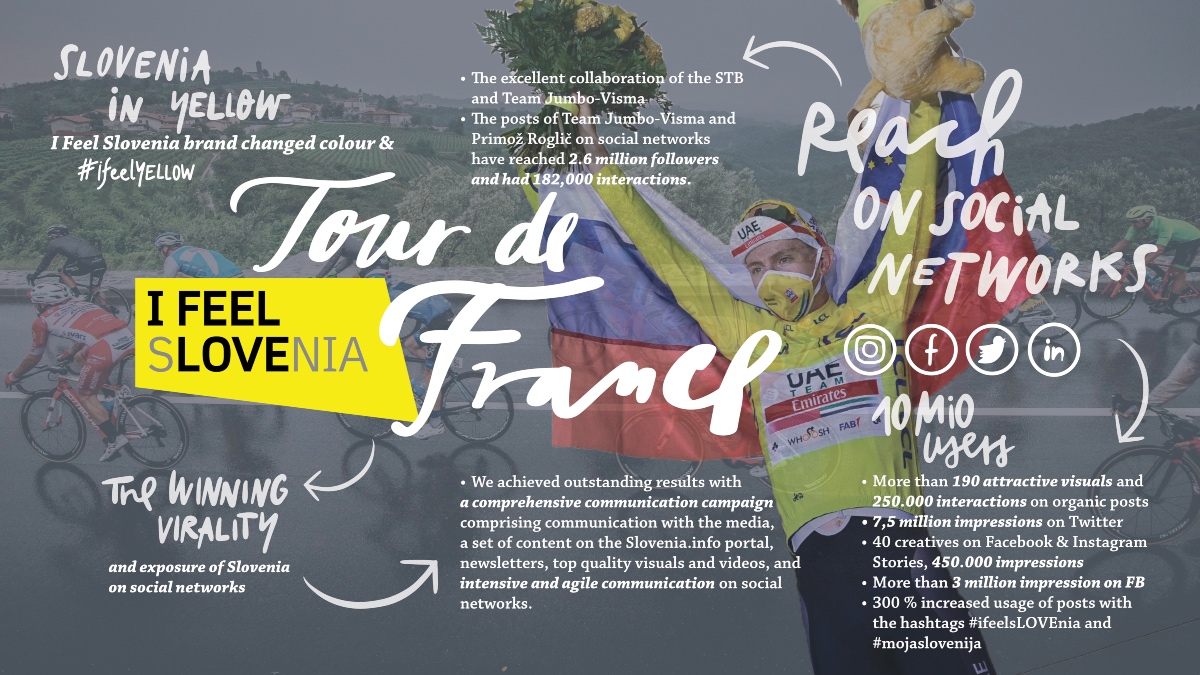 The prestigious Tour de France race catapulted Slovenia to cycling fame. Simultaneously, the Slovenian Tourist Board (STB) team was running another race. One involving climbing up the media world of social networks, online portals and global communication with reporters and partners. Among them has, in the recent years, also been Roglič's team Jumbo-Visma. On the final weekend of the race, when the great turning point occurred, the entire communications team of the STB lived and breathed for one sport and two heroes. The famed Slovenian green in the I Feel Slovenia brand changed colour. Excellent team work, fuelled by creativity, was rewarded by friendly interaction with millions of internet users and readers around the world. The article Why Slovenia is a Tour de Force when it comes to cycling reached more than a billion readers. Slovenia made history as a sporting and cycling superpower. The fans cheering the riders at the race proved that love for Slovenian sport and cycling heroes is unconditional. In Paris, they stole the show and lived out their dream day.

From I Feel Slovenia to I Feel Yellow or: how to get media exposure

Slovenia has a national brand with an eloquent message – I feel Slovenia. It reflects the identity, values and feelings connected by the green colour. However, in the tensest days and stages of the cycling race around France, Slovenia's sporting heart was beating yellow. The communications team of the Slovenian Tourist Board (STB) breathed as one and responded with lightning speed to the developments on the Tour, including the surprising turn of events during the penultimate stage of the race. More than 190 attractive visuals were made for social networks, the Slovenia.info portal and global communications. Some of them included official photos of Jumbo-Visma team taken at the race. The culmination was the splash of yellow across the online communication tools. I Feel Slovenia brand was more exposed in the media than ever before.

The Slovenia.info portal is a centre of good stories to which all paths from online and mass media lead. The heroes of many articles are the Slovenian cycling champions, the "flying arrow" Primož Roglič and the "cannibal from Klanec" Tadej Pogačar. Every week during the Tour de France the media centre highlighted the latest news on the ambassador of Slovenian tourism Primož Roglič and current stories about Slovenia as a tourist destination. A great deal of content was creatively and digitally woven together, as the best cycling roads, climbs and descents in Slovenia still inspire both Slovenian cycling aces. The special message for foreign media entitled Why Slovenia is a Tour De Force when it comes to cycling received enormous attention. We sent it to the most renowned foreign media, achieving 400 publications and reaching in total an incredible 1.064 billion readers. Nine newsletters which continuously highlighted Slovenia as an attractive cycling destination also reached outstanding number of people. The day after the victory was the culmination; a specialised cycling newsletter was created, presenting the story of the sporting heart of Slovenia and sent to more than 67,000 addresses of foreign tour operators, tourist agents and members of the foreign general public.

The winning virality and exposure of Slovenia on social networks

The STB includes sporting events in all marketing and communication tools, especially in communication with foreign media, followers on social networks, visitors to the Slovenia.info portal and various segments of direct e-marketing targets. During the Tour de France each member of the team took one step further towards coordinated communication and integrated synergies, taking advantage of Slovenia's exposure thanks to the undefeatable cycling pair and other Slovenian cyclists to carry out probably the greatest and most viral promotion in the history of STB's communication efforts. A record number of posts with the hashtags #ifeelsLOVEnia and #mojaslovenija were recorded in the media and all social networks, with 7,500 public posts on the day of the win. During the #TDF communication, STB's social networks reached more than 10 million users. Posts and adverts on Twitter had 7.5 million views and on LinkedIn a record 2,356 likes per post was achieved. This was achieved by promptly producing and publishing content, monitoring responses and engaging in posts. Through agile communication, new users were reached. What is more, Slovenia was positioned as a tourist destination that actively connects tourist products and the achievements of Slovenian athletes at major international events.

The STB and Jumbo-Visma Team

The STB has supported outstanding achievements of Slovenian cyclists for several years. We have worked together with Primož Roglič and his Dutch club Team Jumbo-Visma for three years. Roglič and his team highlight Slovenia in their social networks and include the #ifeelsLOVEnia hashtag in their posts.

The posts of Team Jumbo-Visma and Primož Roglič on social networks have reached 2.6 million followers and had 182,000 interactions.

The aim of this partnership is to increase the visibility of Slovenia as a perfect destination for cycling, active leisure time and the training of top athletes. Before the race, Roglič made a video for the Moja Slovenija (My Slovenia) campaign, where he invited Slovenians to spend their holidays in Slovenia. We linked the video to the new winning story of Slovenian cycling and co-created Jumbo-Visma e-newsletter, together with a short story about Slovenia as an excellent cycling destination. It was sent to 44,000 addresses on their media list of cycling enthusiasts.

D-Day for Slovenian fans in Paris

Although the STB's communications team held their breath while glued to the screens of various devices at home, Slovenian fans were not forgotten. This multitude of Slovenian hearts reinforced the stories testifying to love for Slovenian sports and nature in all its shades of green and made them more authentic. At the Tour de France's final stage in Paris the exceptional Slovenian fans made that day feel like a true Slovenian day. We equipped Slovenian cycling enthusiasts who went to Paris via tour operators led by Kompas and Palma with I FEEL SLOVENIA cheering gear. Thus the great images and stories of Slovenian aces and their country came full circle at the point where such passion is the greatest – in the hearts of fans.

Once Tour de France finished, activities aimed at positioning Slovenia as a country of top cyclists and a perfect cycling destination continued. As well as the promotion of the national brand I FEEL SLOVENIA at high-profile international sporting events. An arrangement with the Slovenian Cycling Association was made, to work on the promotion of  Slovenia as a tourist destination at the UCI Road World Championships in Italy. At the moment, the STB is actively involved in following Roglič and other Slovenian cyclists and at the La Vuelta cycling race in Spain.

Outstanding viral reach and results were achieved by conducting a comprehensive communication campaign. This included communication with the media, a set of content on the Slovenia.info portal, newsletters, top quality visuals and videos, and intensive and agile communication on social networks.