From 14 January to 21 April 2019, the Slovenian Tourist Board created a branded content partnership with National Geographic, one of the leading and most recognised media companies in the world. The campaign has had excellent results: more than 8.5m displayed ads on portals, close to 15 million ads displayed on National Geographic social media channels, and more than 222,000 unique users viewed the articles.

A National Geographic photographer based in Slovenia created rich video and photographic content, which used a story of the four natural elements, i.e. air, water, earth, and fire, in the campaign to present Slovenia as a unique destination worth visiting in all four seasons. The videos and photographs of green as well as snow-covered Slovenia appeared on the webpages and social media profiles of this globally influential medium. The video stories of Slovenia were complemented with experiences as seen through the eyes of Ciril Jazbec, a multi-award winning, globally renowned photographer, who has been working with National Geographic since 2014.

“In the search for the next getaway, we are constantly exposed to a large amount of information. In this process, globally recognisable and influential media, which are trusted by experts and the general public alike, play a significant role. National Geographic is a company which, in all of the years of its operation, managed to stay relevant and, as studies indicate, maintain an incredibly high level of trust, since it excites viewers with very high-quality stories, which are based on facts. Within the scope of this cooperation, we wished to address the target group interested in nature, culture, and authentic experiences, and thus strengthen Slovenia’s image as a land with incredible natural beauty and green activities. This goal was achieved by way of world-class production of video and photo contents which were used within a true partnership to generate over 23.5 million displays,” said Maja Pak, Director of the Slovenian Tourist Board, upon the conclusion of the campaign.

The story of Slovenia is unique. The element of air takes you up to Slovenian mountains, water helps you explore the wealth of rivers and the sea, earth presents Slovenia as a world-class wine-growing region and a land with a unique subterranean world and cultural heritage, and fire highlights the special feature of its cuisine, which is based on local ingredients. 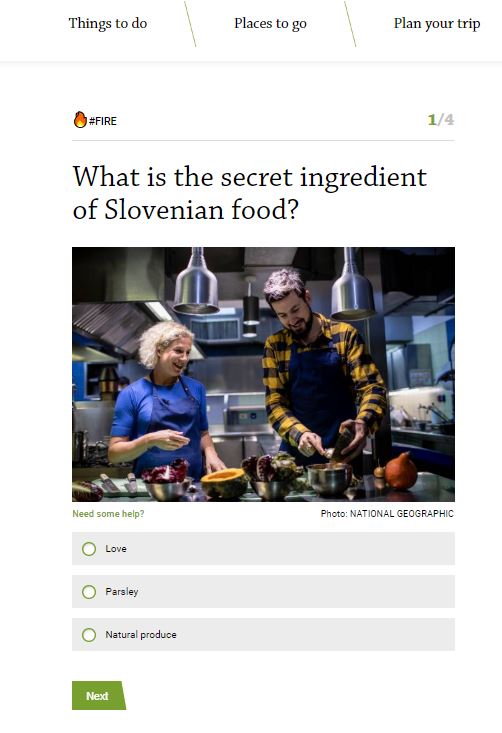 The content of the presentation of Slovenia on the National Geographic communications channels excelled and was thus awarded the Golden City Gate award at one of the most important global travel conventions, ITB Berlin.

Using words, videos and photos, National Geographic is a company which, for over 130 years has been at the forefront groundbreaking storytelling from the best and brightest scientists, explorers, photographers, and filmmakers in the world. The National Geographic yellow border offers a portal to explore the farthest reaches of the Earth and beyond, and reach millions of consumers around the world, every month. It also uses its stories to actively encourage a sustainable attitude towards the environment and sustainable tourism, thus sharing the values of our country, Slovenian tourism, and the ‘I Feel Slovenia’ label. The latter was also one of the most significant reasons why the Slovenian Tourist Board decided to carry out the campaign together with National Geographic, since it addresses the appropriate target group at the same time.

The photographs are intended to be used exclusively on media platforms and the channels of National Geographic and the Slovenian Tourist Board.