For Slovenia, this year's ITB was all about awards: four gold and two silver Golden City Gate Awards, an award by the FVW Magazine, Germany's leading professional magazine for tourism and business travel numerous, which declared Slovenia the winner of the Destination Ranging Central Europe 2019, the Sustainable Top 100 Destinations awards by Green Destinations and Travelife certificate. We could not be prouder. 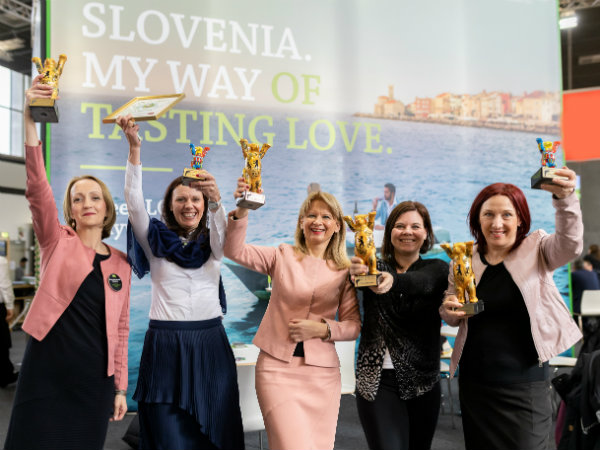 The STB submitted six projects for the Golden City Gate awards and received flattering awards for all of them, highlighting outstanding contributions to multimedia communications in tourism. This is a great success for the promotion of Slovenian tourism because 148 projects from thirty-five countries were registered in twenty-four categories.

The STB was awarded four gold medals by the international jury.

The first award was received in the category of digital campaigns, entitled Make New Memories in Slovenia and Share them with us. With this campaign, the STB invited both residents of Slovenia and visitors to use the keyword #ifeelsLOVEnia in their social media when sharing feelings about Slovenia. The campaign's aim was to gather recommendations for visits and experiences for less well-known destinations and products in particular. 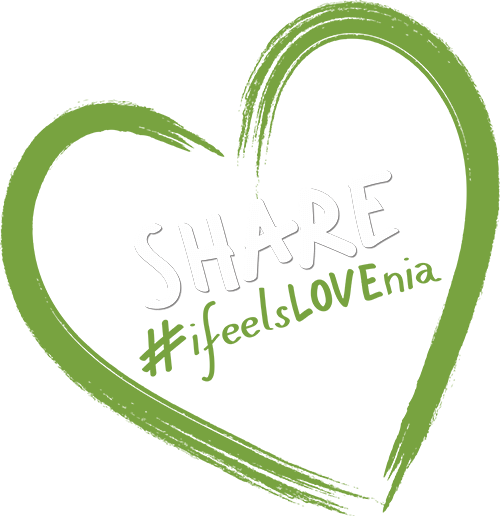 The second gold in the innovation category was awarded to the STB for successfully carrying out the project Stories on Instagram @feelslovenia, inspiring tourists in a useful, understandable and attractive way to visit various destinations in Slovenia.

In the category of printed promotion, Media Kit was the winner, representing an important promotional tool for presenting key products of Slovenian tourism to the media, social network influencers and public relations agencies.

The STB also received gold in the category of international campaigns for four videos entitled Natural elements of Slovenia: Earth.Water.Fire.Air. which were created as part of a multi-channel campaign in partnership with National Geographic. The concept of four natural elements plays an important part in telling the story of Slovenia's incredible beauty andinviting tourists to explore its boutique experiences, while emphasising Slovenia's commitment to sustainable development.

The first one was awarded in the eco-tourism category for the video Alpe Adria Trail,  which, by telling the story of hiking in the Garden of Eden, depicts the richness of the gastronomic, landscape and cultural diversity of the Alpe Adria Trail. The video is intended for digital promotion and promotion at business events. The second silver was awarded to the STB by the jury in the category of new inspiring content on the leading destination websites in the Slovenian central tourism portal www.slovenia.info. Together with destinations from four macro regions, it was created on the basis of product and experiential clusters, making it easier for guests to choose experiences based on their interests, time and resources.

"The awards for excellence in communication prove that the promotion by the Slovenian Tourist Board is modern, attractive and innovative, and above all it supports the vision of Slovenia as a green and boutique tourist destination for five-star experiences.  We are pleased that a group of international experts has recognized and rewarded our efforts in creative and effective promotion. Awards – those intended for the development of sustainable tourism in Slovenia, which Slovenia's green destinations received yesterday, and those for the promotion of Slovenian tourism – contribute to Slovenia's reputation and profile," pointed out Maja Pak, director of the Slovenian Tourist Board.

The Golden City Gate Awards, which highlight the most innovative and creative tourism-related projects intended to promote destinations and products, have been awarded on the basis of a jury assessment at ITB Berlin since 2001. The international group consists of experts from various fields, including tourism, the film industry, marketing for the hotel industry, IT, music, public relations, and design; it also involves ministers, ambassadors and public institutions. The jury evaluates the concept, creativity, communication value, visual effect, emotions, suitability for a particular target group, the medium they are created for, and other aspects.  The STB also received the Golden City Gate award in 2017 and 2018.

At ITB Berlin, the STB won another award: an award from FVW magazine, Germany's leading professional magazine in tourism and business travel, which ranked Slovenia first in the Destination Ranking Central Europe 2019. Slovenia is a winner among Central European countries, noting 68% growth in the number of overnight stays by German guests, and it is a leading country compared to other countries in the region. The target group of the magazine is management personnel, decisionmakers, managers and sales professionals in the German tourism industry.

Also the efforts in achieving sustainability in tourism did not go unnoticed. Some destinations that have received the golden and silver sign of Slovenia Green within the framework of the Green Scheme of Slovenian Tourism and the National Program for Promoting and Promoting Sustainable Tourism have also been ranked among the most sustainable destinations in the world by ITB Berlin. With the best sustainable practice, Ljubljana won the Best of Cities category, receiving the award for its best practice – the implementation of the Locally Grown Food Exchange. Bled ranked second in the Best in Europe category and Komen, Rogaška Slatina, Idrija, Koper and Podčetrtek ranked among the 25 finalists of the Best in Europe thanks to their efforts in responsible tourism. The Sustainable Top 100 Destinations awards are awarded by Green Destinations, which, among other things, declared Slovenia the first green country in the world in 2016 and ranked it among the six best sustainable destinations in the world and the Best in Europe in 2018. In addition to these awards, Travelife certificates were also awarded; among them was also the Slovenian tourist agency Atlas Express.