European Food Summit (EFS) starts tomorrow, on 6 of November. A set of remarkable culinary events will take place, culminating on Monday, 8 November, with the symposium entitled FOOD for future's GOOD, supported by the Slovenian Tourist Board as a project partner. As many as 24 exceptional representatives of foreign media and influencers from the field of cuisine and sustainability from 14 countries will attend the event.

European Food Summit, the central gastronomic event in Slovenia and one of the most important European culinary events, also represents a unique platform that co-creates the sustainable future of European gastronomy. The press conference was held yesterday. 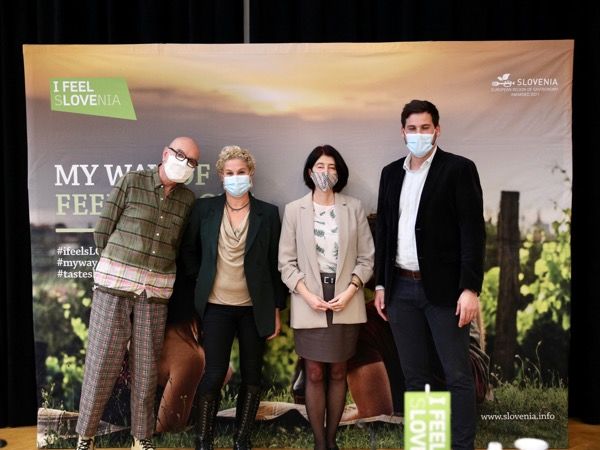 According to the organizer of the event, Martin Jezeršek, General Manager of Jezeršek gostinstvo, European Food Summit is much needed, not only for Slovenia: “There are many culinary events in Europe, but none of them connects Europe as a whole. And we wanted to fill that void. In fact, we need an event like the European Food Symposium from several perspectives. In the field of sustainability, we look at the event as a connecting link between all key stakeholders."

Barbara Zmrzlikar, Head of Research, Development, Innovation and European Projects Department at the STB, emphasized that such events are crucial, also for Slovenia's visibility: “With such events, Slovenia proves that it can dictate the direction of development also in such a challenging areas as the area of global impacts of food on our common future. Gastronomy is one of the key elements of Slovenia's tourist offer and has made a remarkable breakthrough in recent years. Thanks to a systematic and goal-oriented approach to the development and promotion of sustainable gastronomy, Slovenia is becoming one of the most attractive gastronomic destinations in the world.”

Katarina Marinovič, external associate in the field of tourism products development at Ljubljana Tourism, also a partner of the event, is aware of the importance of the event and networking: “We are glad that European Food Summit takes place in November, during November Gourmet Ljubljana festival, when the best flavours, ingredients and innovative approaches are presented by the best chefs. European Food Summit with accompanying events is definitely the very first highlight in the series of numerous events which will take place during the festival."

Slovenia is gaining on visibility in terms of gastronomy, which is characterized by high quality, sustainability, uniqueness, innovation and creativity

Slovenia has made great strides in the field of gastronomy in recent years and is becoming an increasingly visible destination for top gastronomic experiences. Gastronomy is one of the key tourist products of Slovenian tourism, which significantly contributes to the realization of the goal of creating higher added value, deseasonalization and diversification of tourist flows. What is more; gastronomy significantly contributes to the positioning of Slovenia as a destination of great experiences by creating unique modern products based on tradition. In the field of development of sustainable gastronomy, the STB has made important steps in the last year, especially by including gastronomy in the Green Scheme of Slovenian tourism, which allows various food providers and restaurants to obtain the Slovenia Green Cuisine label. In the year when Slovenia holds the prestigious title of European Region of Gastronomy, activities to eliminate single-use plastics from the hospitality industry are also underway. Top gastronomic providers are also highlighted by the most influential international gastronomic guides such as Michelin and Gault&Millau. In the last two years, the STB has highlighted gastronomy as a central two-year topic in numerous marketing and promotional activities at home and abroad, as part of the The Time is Now. My Slovenia. campaign, within the special Taste Slovenia portal, in digital campaigns and advertising, on social networks, in rich video and photo material and with press trips.

EFS will host numerous distinguished guests from Slovenia and abroad

Within four days, the EFS will host a number of events, including the symposium entitled "FOOD for future's GOOD", I feel Slovenia press trips for foreign media and an experience dinner with Michelin-starred chefs. On Monday, November 8, the symposium, the central event of the EFS, will take place at Ljubljana Castle under the slogan "EVOKE UP!" The curator of the event, Andrea Petrini, calls for an action: “Evoke up, it is time for European Food Summit! It is time to revive stories, to invent poetry, to break down boundaries and connect into new alliances, to share the experiences of our lives, and to work together for a more nourished and better world. "To evoke" does not mean that we need to separate into two poles, we do not believe in divisions and in witch hunts – not in food and not elsewhere. The call to evoke is an invitation to get our hands dirty – and have fun doing it. Now it’s no longer about presentation, it’s about actions. Join the evoked ones!”

The biggest names and outstanding individuals from the field of cuisine, science, art and the media, among them the world's number one chef René Redzepi (Noma, Denmark), chef Ángel León (Aponiente, Spain), chef Nicolai Nørregaard (Kadeau , Denmark), Chef Colombe Saint-Pierre Chef (Chez St-Pierre, Canada), Chef Rebecca Clopath (Switzerland), founder and chair of the Parabere Forum Maria Canabal (France), Canadian journalist and activist Marie-Claude Lortie (La Presse , Canada), British writer John Lanchester (UK), curator and art critic Nicolas Bourriaud (France), director of Energotuš Slovenia Andraž Tuš, young researcher at the Biotechnical Faculty Beti Vidmar, local suppliers Jeanne Dumas Chalifour and Matteo Monterumisi, will inspire participants with their stories and encourage us to think forward towards a better and more sustainable future. “Their job is to inspire us. And when the curtain falls on Monday, we want every individual to be aware that they have an important role to play. It’s important to start with yourself. And if each of us changes at least one thing for a better and more sustainable future, we can certainly change something," pinpointed Martin Jezeršek.

As part of the symposium, also round table discussion entitled "Responsible and boutique farming in response to the crisis situation" will be held, moderated by Ana Roš and attended by distinguished guests, including Minister of Agriculture, Forestry and Food Jože Podgoršek, cheesemaker Irena Orešnik (Sirarstvo Orešnik) and fish farmer Mitja Zupan (Zupan Fish Farm). They will present examples of successful local individuals who found themselves in difficult situation, be it geographical, economic, social or sociological, and set up sustainable and socially responsible companies that weave successful stories and resonate far beyond Slovenian borders.

Also this year, during the EFS, the STB will host as many as 24 renowned foreign journalists and influencers from 14 countries, who will have a chance to experience Slovenia's gastronomy as a whole. Among them are also journalists that write for the most influential European and world media such as the Italian daily La Reppublica, British The Guardian, American Forbes and the Dutch Telegraaf. EFS will also be visited by renowned gastronomically specialized media, including Austrian Falstaff, German Kulinariker and Fine Dining Lovers. As part of the I Feel Slovenia press trip organized by the STB, journalists will set out to explore Slovenia's diverse gastronomic offer on Friday, when they will visit the top restaurant of the world-renowned chef Ana Roš. On Saturday, they will continue their culinary journey through Ljubljana's museums and galleries, where they will be pampered with the creations of renowned Slovenian chefs. Sunday is reserved for press trips to the hidden corners of Slovenia, where a number of exceptional and impressive culinary stories are hidden. The day will end again in Ljubljana, with another culinary event. On Monday, they will attend a symposium, where recognizable names from the culinary world will give their views on current events in the culinary world and reveal many inspiring stories that pave the way for sustainability in the culinary world. The symposium will end with one of the most anticipated events of this year's summit, the "experience dinner", where Michelin-starred Slovenian chefs will join forces.

The first accompanying event will take place this Saturday, November 6, when a fusion of cuisine, culture and architecture will be on the agenda. Foodies will be treated to Gourmet Ljubljana Crawl, a unique culinary walk through the cultural sights of the city of Ljubljana, where participants will be pampered by top chefs from the JRE Slovenia association. Another great option to experience the very best bits of Ljubljana will be an unforgettable culinary adventure on Sunday evening – Ljubljana Soul Chefs, where top Ljubljana chefs will present their masterpieces. On Monday evening, Experience Dinner will take place in Cukrarna, where this year's recipients of Michelin stars will for the first time join their forces under one roof and it is with their unique creations create an unforgettable culinary pampering.