Also this year, the Slovenian Tourist Board (STB) designed a communication campaign to raise the visibility of Slovenia as a tourist destination during the Tour de France.

Top athletes, ambassadors of Slovenian tourism, including cycling aces Tadej Pogačar and Primož Roglič, make a key contribution to increasing the attention of global media, sports fans and other publics, and thus strengthen Slovenia's reputation as a destination for excellent active experiences in nature. On this occasion, the STB launched a new promotional video with Pogačar and Roglič.

The second overall consecutive victory of Tadej Pogačar, Matej Mohorič's two stage victories and Primož Roglič's hearty fight at this year's Tour de France have contributed to the extraordinary growth of Slovenia's recognition as a cycling superpower in the world. The STB, which strengthens the recognition of Slovenia as a country of top athletes, a destination for active holidays and a host of major sporting events, also this year carried out an extensive communicational campaign and a number of promotional activities.

MSc. Maja Pak, director of the STB, pointed out: “Also at this year's Tour de France, the Slovenian Tourist Board designed a communication campaign to attract the attention of millions of audiences for Slovenia and present it as a unique destination for active holidays. Together with top cyclists, ambassadors of Slovenian tourism, Pogačar and Roglič, we prepared a new promotional video, introduced the foreign media to Slovenia as a country where the most successful cyclists and other top athletes come from, and strengthened communication on social networks and on the central slovenia.info. portal. We addressed millions of cycling enthusiasts with top-quality visuals that include our cyclists, the I feel Slovenia brand and the beauties of Slovenia. The race in France is watched on television screens in as many as 190 countries, and more than 37 million viewers watched the race via Eurosport alone. We also coloured the I feel Slovenia sign yellow. Cycling is also becoming increasingly popular in Slovenia, and with the success of Slovenian cyclists, the number of cycling races is growing. "

The STB has prepared a series of attractive and innovative visuals for communication during the Tour de France, which also include Tadej Pogačar and Primož Roglič. The video quiz with both riders received over 50,000 views on the Feel Slovenia social media channels. In addition, it was shared by a number of media.

Two days before the start of the race, the STB had launched a new video with Slovenian cycling aces, Primož Roglič and Tadej Pogačar, ambassadors of Slovenian tourism. In the video, Primož and Tadej go head-to-head to discover their knowledge of the country and inspire the viewers to test their knowledge as well.

The video with Roglič and Pogačar is the first in a series of new videos that the STB will prepare in the coming months with top Slovenian athletes and other ambassadors. This is how the STB will connect Slovenia's tourist offer with the world-recognizable faces, which significantly contributes to the visibility of Slovenia in the world.

New landing page on Slovenia.info: Why Slovenia is synonymous with the Tour de France?

On the Slovenia.Info portal, the STB has set up a new landing page entitled Why Slovenia is synonymous with the Tour de France? In addition to the stories of Primož Roglič and Tadej Pogačar, a number of other cycling contents have been added and refreshed, among them also Ten reasons for a cycling adventure in Slovenia.

Here are some of the latest content, where the STB highlights diverse tourist offer for cycling enthusiasts in Slovenia: The most beautiful biking trails, Juliana Bike – a touring cycling experience in the Julian Alps, Bike Slovenia Green - your sustainable choice of exploring Slovenia by bike, Brezze around Slovenia by e-bike, Get to know the cycling side of Slovenia, My way of exploring Slovenian towns and cities by bicycle, Around Slovenia by bike or on foot, Discover the beauty of Slovenia on foot or by bike, Go underground by bike and kayak, Cycling among vineyards.

Also on Feel Slovenia social networks, STB prepared a series of communication activities, which included interaction with followers through various types of posts and sponsored advertising. The posts are diverse in content and enriched with top visual elements. Advertising took place mostly on Twitter, as the reach of current sporting events on this channel is the largest, and the key goal was to highlight Slovenia as an excellent destination for active experiences and STB's cooperation with top cyclists and ambassadors of Slovenian tourism, Roglič and Pogačar. 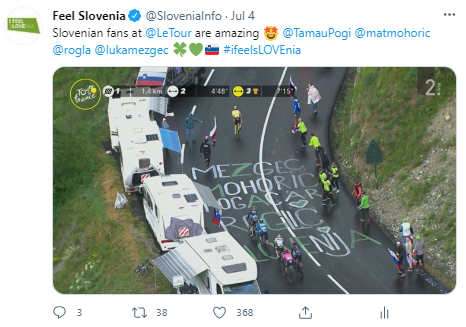 In July, the development team of the Dutch cycling club Jumbo Visma visited Slovenia again. Our cycling ace Primož Roglič is a member and with him, the STB has carried out numerous promotional activities since 2017. One of the joint promotional activities is the preparation camp of the Jumbo Visma development team in Rogla. While more than 20 promising cyclists trained in Slovenia between 3 and 10 July, the Jumbo Visma cycling club, together with the STB, Slovenia Outdoor and Unitur prepared an activation campaign, in which they addressed their followers to participate in the prize game. The lucky winner received a weekend cycling package on Rogla. In addition to the preparation camp, activation campaign and the engagement of fans in the promotion of the I feel Slovenia brand, the cooperation with Jumbo Vismo also includes posts about Slovenia in their e-newsletter and posts on their social networks.

Tour de France - a sporting event with exceptional reach, which represent an excellent opportunity to raise the visibility of Slovenia

Tour de France is the largest and most prestigious three-week cycling race in the world, followed by millions of sports enthusiasts and the most influential media. Last year, the race's website reached as many as 202 million views. The official profile of the race on social networks, which records as many as 8.7 million followers, is also extremely popular.

This year, Tour de France was held for the 108th year in a row. The world's best cyclists competed for the yellow jersey from June 26 to July 18, when Tadej Pogačar became the overall winner for the second time in a row.

In June and July, also during the Tour de France, an advertising campaign with 30-seconds videos has addressed fans of active holidays of Slovenia on the television programs Eurosport 1 and 2 and on the Eurosport.com website.

In addition to numerous activities that took place online, the STB has equipped Slovenian fans with Feel Slovenia flags to encourage our champions on the route and show the whole world that Slovenia is a country with a sporty heart.