As the only foreign country at the Food and Travel Italia 2020 Reader Awards, Slovenia receives recognition for excellence in enogastronomy; it has received the prestigious “Nation of the Year” award. 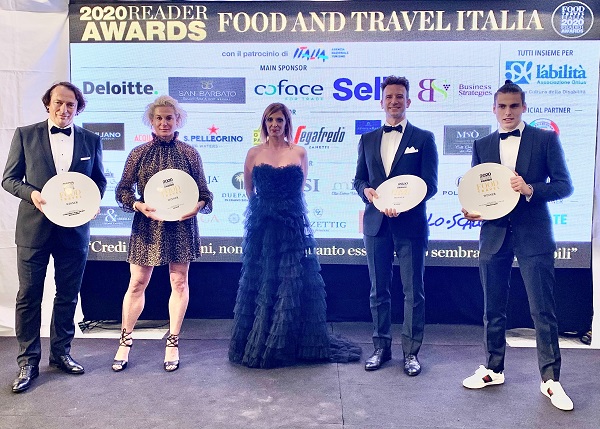 Top Slovenian chef Ana Roš was named the International Chef of the Year, winemakers Marjan Simčič and Leonardo Simčič both received awards for quality in winemaking.

The Readers Awards 2020 event, at which the international magazine Food and Travel Magazine Italia gave out awards for excellence in enogastronomy, was held on Friday, 2 October, in late evening in Lavello, Italy.

The award in the category Nation of the Year given to Slovenia and distinguished recognitions given to the most renowned chef and winemakers additionally put Slovenia on the map of destinations with premium gastronomy experiences in the Italian and global markets. The award received by Slovenia was the only award in gastronomy given to a foreign country, which  makes  this award that much more important.

Mag. Maja Pak, Director of the Slovenian Tourist Board: “We are extremely happy that Slovenia received four awards given by the distinguished gastronomy magazine reaching more than 600,000 readers around the world, because this enhances the recognition of Slovenia as a gastronomy destination. Distinguished awards confirm the excellence of Slovenian gastronomy and boost the attention of the media, business, and general public given to Slovenia. The awards are even more welcome in a year when Slovenia got its first Michelin guide and seven Michelin stars and while it carries the European Region of Gastronomy 2021 title. The awards represent a great initiative and motivation on the path to tourism recovery and further growth of recognition and Slovenia’s reputation as a sustainable destination for excellent gastronomic experiences.”

The awards were given on the basis of Food and Travel Italia readers’ voting (which was held from June to September 2020).

Aljoša Ota, the manager of the Slovenian Tourist Board branch office in Italy, accepted the award in the name of the Slovenian Tourist Board and emphasised: “At the Reader Awards 2020 event, the international Food and Travel Italia magazine gave out awards to the most important stakeholders in the oenogastronomy industry and other recipients of recognition of excellence. The ‘Nation of the Year’ award given to Slovenia is of great importance for the positioning of our country as a premium gastronomy destination in the Italian market, because it contributes to the designing of what is known as brand awareness. The award is an important step in strengthening the recognition and reputation of Slovenia as a destination for excellent gastronomy experiences, i.e. for Italian guests and other gastronomy lovers.”

When receiving the award, Ana Roš highlighted the following: “Each award that I receive or that my team receives is of great importance and holds a special place in our hearts and feelings, especially because it is a reward for the work we have done so far and all the efforts invested in this work. It is also an important incentive for us to improve and boost our work as well as a reminder that there is still a lot of room for personal and professional growth. The day when we receive an award is most certainly a day for celebration, but the next day starts with new challenges, in the kitchen and hospitality. Therefore, I want to thank Italy for noticing our work and I hope that they will keep a close eye on as in the future too. At the end of the day, every guest matters, because times are hard and, as a result, every award carries an even greater value.”

Marjan Simčič commented on the importance of the award: “I am proud to receive the VINO INTERNAZIONALE DELL'ANNO award given by the internationally recognised Food & Travel Italia magazine for the Chardonnay Opoka 2017 Jodano Cru wine, which had already been recognised in Italy previously and given 100 points. This high score for white wine is quite rare. I am aware that our strategic work in the past twenty years has brought us the current recognition in this demanding and large market with such an exceptionally high-end wine culture. Our successes in this market most certainly contribute to the promotion of the Brda Hills as a wine region as well as of Slovenia. In the past few years, Italians have become the most common oenogastronomic visitors of Slovenia.”

The Food and Travel Italia magazine is published in English, German, Spanish, Greek, Portuguese, Arabic, Italian, and Turkish. The magazine has received many awards proving its great reputation and the importance in international gastronomy. The magazine was issued for the first time in 1995 in Great Britain.

Even if gastronomy is not the main reason to visit a destination, it plays a very important role as a secondary or partial motivation for coming to a certain destination. Research shows that, in terms of interest in gastronomy tourism, the most important markets to us include Italy, Austria, Germany as well as France, Great Britain and some Scandinavian countries. Italian guests who, at EUR 156, rank among the guests with above-average spending per day as per the 2019 Survey of Foreign Tourists, state that gastronomy pleasures are among the top 10 most wanted activities at a destination, while gastronomy-based motivation remains among the top 10 incentives for travelling.