As part of this year's Global Digital Campaign under the slogan Only in Slovenia, the Slovenian Tourist Board is working with BBC Global News which, according to the Ipsos Affluent Europe 2019 survey*, reaches more affluent international travellers in Europe through its digital platforms than any other international news brand.

The campaign was created by the BBC’s branded content arm, BBC StoryWorks, whose production team visited Slovenia in April and created videos for four 30-second advertisements to be run on television and a branded content hub on BBC.com. During the campaign, online advertisementswill be shown over 19 million times in the US, Canadian and European markets, of which  more than 14 million will lead to a special landing page of the BBC while others will lead to the portal slovenia.info, more precisely to the sub-pages of all four tourist regions: Alpine Slovenia, Mediterranean and Karst Slovenia, Thermal Pannonian Slovenia, and Ljubljana and Central Slovenia.

"By means of an intense two-month promotional campaign on the BBC, the Slovenian Tourist Board continues its promotion of Slovenia in the largest and most trusted global media. The video contents, which stands out regarding its production values and substance, showcase how unique and green our country is, as well as its wealth of fine gastronomy and culture. Accordingly, the advertisements will also be shown on the BBC Travel, BBC Culture and BBC Good Food subpages, where target groups who would be interested in visiting Slovenia are addressed. Digital advertising will further take place through the social profiles of BBC StoryWorks, where we expect to reach almost one million users," said Msc. Maja Pak, Director of the Slovenian Tourist Board, at the start of the campaign. 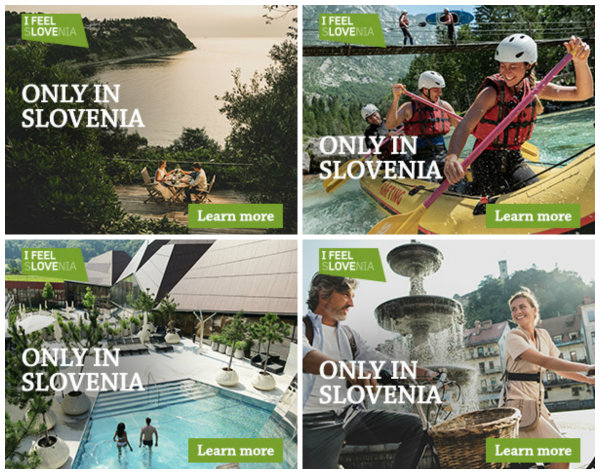 Above: Online advertisements for the promotion of the four tourist regions, photos by Ciril Jazbec.

Television advertising will involve the 30-second commercials created for this campaign being shown 172 times on the BBC World News channel. After the campaign the Slovenian Tourist Board will use these advertisements for promotion on its own channels.

The common thread in the advertisements are the experiences that can only be enjoyed in Slovenia, while they also give viewers a broader picture of Slovenia's distinguishing features:

One of the four advertising videos that will present unique Slovenia to BBC viewers and the users of the BBC's online portals and social media.

*Based on monthly reach