COVID-19: Latest information about the situation on COVID-19 in Slovenia

The Kranjska sausage is one of the most internationally recognisable Slovenian specialties. This popular sausage has been listed among the protected agricultural products in the European Union. 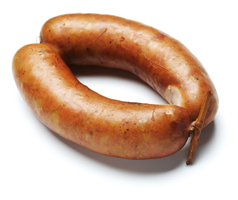 Unique Slovenia is famous for numerous culinary specialties. The Kranjska sausage is one of the most internationally recognisable Slovenian specialties. This popular Slovenian sausage has been listed among the protected agricultural products in the European Union. The protection is proof of quality and reputation related to the geographical origin. You can enjoy Kranjska sausage with sour cabbage or sour turnip and freshly grated horseradish. Bon Appétit!

Kranjska sausage has been produced in Slovenia since the beginning of the 19th century. It originates from the Gorenjska region, from where its popularity spread throughout the entire country. It used to be on the menus of dinners at celebrations and important events and was known all the way to Vienna. Its fame is seen in an interesting anecdote about the Emperor Franz Joseph I of Austria and their first encounter in Naklo near Kranju. An innkeeper is said to have served the emperor with the only food he could offer, a simple homemade sausage. The emperor tried it and was delighted with its taste, naming the sausage kranjska klobasa. Slovenians have taken Kranjska sausage around the world, and the US astronaut of Slovenian descent Sunita Williams even took some into space.

Since the end of 2014, Kranjska sausage has been protected with geographical indication by the European Union, additionally confirming the international recognisability of the product and the popularity of this Slovenian specialty. Let yourself be convinced about its quality and unique taste at the Kranjska sausage festival, which takes place every August in Sora near Medvode. A competition and evaluation of individual types of Kranjska sausage is followed by an award for the best one. The Kranjska sausage can be produced only by certified companies to a strictly prescribed recipe and confirmed procedure. As many as 13 Slovenian producers are associated in the Kranjska SausageCommercial Interest Association. Every day they prove that there is only one true Kranjska sausage.

By making it on to the list of protected agricultural products in the European Union, the Kranjska sausage joined the group of Slovenian dishes that already had the prestigious label of protected geographical indication. From these protected specialties, you can try a slice of prleška tünka (minced lard and pork), zgornjesavinjski or šebreljski želodec (a type of salami). Unique pršut (prosciutto), zašink (cured pork neck) and panceta (pancetta) are produced in the Karst. Take a bite of ptujski lük, juicy and aromatic onion from the Ptuj field, which is excellently supplemented by štajersko and prekmursko bučno olje (Styrian-Prekmurje pumpkin-seed oil). The famous idrijski žlikrofi (Idrija potato-filled dumplings) and the rich prekmurska gibanica (Prekmurje layer cake) with poppy seeds, cottage cheese, walnuts and apples have a guaranteed traditional quality. Cheese lovers should try a slice of Nanos cheese, Bovec cheese, Tolminc cheese, Kras sheep’s milk cheese or the slightly piquant Mohant cheese from Bohinj. Meanwhile, the protected extra virgin olive oil of Slovenian Istria and Piran salt from the Sečovlje salt pans bring the taste of the Mediterranean. Taste Slovenia! Have a taste of other dishes and products with protected geographical indication and Slovenian specialties that have shaped the cuisines of the 24 gastronomic regions of Slovenia.